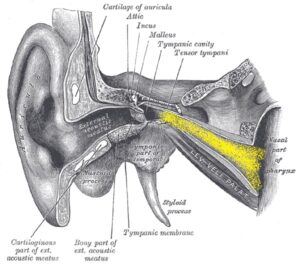 The Eustachian Tube (ET) controls air pressure relief inside what is called the middle ear (behind the eardrum where all the fancy ear stuff happens).  This area behind the eardrum is a mostly closed off small space that is prone to pressure accumulation.  Building of pressure happens in the ear naturally after just a few minutes, but the body normally relieves this pressure by quickly opening the ET and allowing airflow to happen and pressure to equalize.  In severe problems the ET never opens well because it may be simply too small, too stiff, or scarred shut.  These patients will have problems with fluid accumulation in the ears, ear infections, and often holes that develop in the eardrum to relieve the pressure otherwise.

Milder ET symptoms may present with a pressure feeling in the ears, fluctuating or muffled hearing, problems with airplane flights or scuba diving (or even on very high building elevators).  Many of these patients are OK at ground level but once you put the ears to the test with quick altitude change, quick pressure change, or a sinus infection the ears get swamped in and pain or infection may ensue.

Dilation of the eustachian tube was tried decades ago but unsuccessful mostly due to poor surgical instruments at the time.  However recently with advancing balloon technology we now have a good procedure, often done in the office, that will dilate the Eustachian tube soft structures to improve air and pressure clearance in the middle ear.  Medicare and insurances are slowly catching up to this procedure and beginning to cover it.

Dr. Rogers has been working with eustachian tube dilation since about 2014, performing some of the first procedures in the Southeast.

Eustachian Tube Balloon Dilation may be helpful for: